A passage in Kent Greenawalt’s Does God Belong in Public Schools? discusses the case of a Muslim school teacher who could not teach in Philadelphia public schools because she wore “religious garb,” which violated the Pennsylvania’s “Religious Garb” statute.

That no teacher in any public school shall wear in said school or while engaged in the performance of his duty as such teacher any dress, mark, emblem or insignia indicating the fact that such teacher is a member or adherent of any religious order, sect or denomination.

I wondered if a distinction could be made between clothing which identifies a person as part of a religious order and clothing which identifies a person as a member of a religion. I wanted to assert that members of an order typically wear the same style of clothes, almost a uniform, while Muslim women, while complying with custom or perceived religious instruction, wear a wide variety of clothing. Is it still religious clothing if her hem line is 2 cm above her ankles or 5 cm of her forearms are revealed? Does color matter? Is the shelwar qamees worn in the Indian subcontinent acceptable while an abaya, common in Egypt and Saudi Arabia, is unacceptable? Or vice versa?

Upon reading the law, however, it does cover anything “indicating the fact that such teacher is a member or adherent of any religious order, sect or denomination.” Of course, that it is only applied to a Muslim woman is a result of increased scrutiny of Muslims and a low number of Muslim women in the profession, which of course might be a result of laws like Pennsylvania’s that are discriminatory against them in practice and all the subtle ways employers illegally discriminate against a group without being stupid enough to get caught, abetted by the pro-business Supreme Court. There are also a lot of legal ways to discriminate, too.

And, if you don’t think that this is discriminatory against Muslims, how many times has this law been used to prevent a white Christian from teaching? Remember, “small” crosses are “jewelry,” not religious symbols. There are others who could also be injured by this law. Should a Hindu wearing a bindi been fired? Egyptian Christians often have crosses tattooed in visible locations, such as the neck and hands. So, Pennsylvania, get on the ball and get rid of this law.

I tried to read the United States Court of Appeals, Third Circuit ruling on this case, but my lack of legal training made it difficult. I believe it ruled on matters of employment law, but I was uncertain if it ruled on the constitutionality of the Pennsylvania law. In my mind, the only way that a teacher’s “dress, mark, emblem or insignia” should be prohibited in a public school is if the teacher’s other actions in the classroom could be classified as proselytizing or if the teacher only wears the clothes at school and not in other facets of life or if teachers conspire to wear clothes for a particular religious purpose at the school. Examples of actions which could be classified as proselytizing would be kissing a crucifix, doing ritual Muslim prayer, which involves specific postures, during class, etc.

My mind drifted to another thought, however, that I’m calling the Discrimination – Fanaticism Cycle. Remember when Ice-T sang in the theme song for the movie Colors (“Yo, Holmes!”):

My pants are saggin, braided hair
Suckers stare but I don’t care

Remember when cities were passing statutes fining (young black) men for wearing sagging pants. No doubt police departments practicing “stop and frisk” focus on young black men with braided hair and sagging pants. Now I know Bill Cosby and even people I respect urged men not to dress this way, but there’s no evidence at all that using the police to target young men for these things improves society. What’s more likely, in my opinion, is that as discrimination against young men with these characteristics intensifies, those who were dangerous, anti-social criminals adopted these characteristics. Other, non-dangerous young men might change their appearance as well for a variety of non-nefarious reasons, and, upon experiencing discrimination, might then become the anti-social demons society feared.

Even more ironic is the fact that the media/culture industry promotes “urban black gangster culture” to sell products to white suburban youth and confirm white hegemonic assumptions about blacks.

I’ve tried to use my extremely limited graphic design skills to illustrate the Discrimination – Fanaticism Cycle. 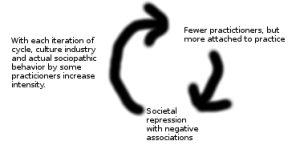 I hope this cycle is even easier to understand while talking about clothing associated with Muslim women. By any objective standard, the clothing is innocuous. When employers and others discriminate against women who wear clothing the discriminators associate with being Muslim, some women will cease to wear these clothes to avoid those hardships. The women who continue to wear these clothes will automatically begin to attach more importance to them. As both of these trends continue, the majority population will, while rarely admitting publicly its discrimination, instinctively realize that only a “true believer” would persist despite these hardships and will then embrace the discrimination as sound policy by claiming that the clothing is a marker for a person with anti-social tendencies.

And if you doubt that there is a culture industry adding accelerant to this cycle, then you haven’t taken President Obama’s recommendation to watch Showtime’s Homeland to heart. And, yes, women’s clothing is reproduced in the most frightening manner possible.

One way to combat this cycle is for the minority group from whose members the practitioners of the (once) innocuous practice emerge to de-emphasize the importance of its adoption or its abandonment. Notice how I tried to phrase that. If two applicants came to me for a job, one with cornrows and sagging pants and the other with another hairstyle and “belted” and I considered each on his merits, I’ve decreased the significance of those choices in appearance. If I hire one teacher wearing abaya and covering her hair and another who wears a skirt, sleeveless top and leaves her hair uncovered, I’ve reduced the importance of both women’s clothing choices.

If Muslims ceased discussion of how women should dress, that would contribute to a lessening of the issue’s intensity.

I do want to return one more time to Pennsylvania. The word garb does not appear in the statute, yet it is known as the Pennsylvania “Garb Statute.” Dictionary.com’s first definition of garb is “[noun] a fashion or mode of dress, especially of a distinctive, uniform kind: [example] in the garb of a monk.” Whenever people in the majority discuss clothes, they use words like “garb” and “costume” and “outfit.” To me, these words push people from the “us” to the “them.” They other. Yes, I used other as a verb. So don’t tell me this statute’s purpose or application is protecting children from religious establishment.

Updated 2015-04-29: If you really want to know where focusing on women’s clothes leads, check out the latest debacle from France.