I moved back to my hometown of Augusta, Georgia 13 years ago after an absence of 18 years, except for visits. Shortly thereafter, I bumped into a person whom I considered a friend from high school. We exchanged pleasantries and became friends on Facebook. At some point, this former friend (“FF”) objected to some of my political posts, and, after some online back-and-forth on these matters, we stopped being friends on Facebook (and I don’t remember who “defriended” whom), although we do have mutual friends there. We haven’t, to my knowledge, met again IRL.

Several years have passed. I’m a Facebook administrator and one of the web people for Muslim Community Services of Augusta (MCSA).*

This morning, as an administrator, I received a notification that FF had commented on this post. Seven hours after this June 5, 2017 picture, FF wrote:

Three days after an attack in my home country. Bad bloody taste.

I’ve placed a screenshot showing the comment at the end of this blog entry.

As an administrator of the page, I can delete comments or hide them. I prefer to hide them, and I’ve done so. When a Page administrator hides a comment, it remains visible to the Facebook User who wrote it and their friends. When a Facebook User comments on a Page, that Page’s Administrator gets to see that user’s profile. So I saw that FF & I share many friends on Facebook.

Here’s some quick, snide responses they could write:

It might be more effective to refer FF to an observation Jeremy McLellan made about comparing Christianity and Islam. In other words, refrain from sarcasm.

I’m so tired of people saying things like “Why don’t the ‘moderate’ Muslims stop the extremists?,” as if al-Qaida and Bashar al-Asad and ISIS have me on speed dial asking me my opinion. Also, I, like intelligence and police agencies worldwide, have not yet developed a pre-crime sense which allows me to detain a Muslim (or anybody else) before he or she commits a crime. The only thing I can do, and which I do do, is mourn for victims and publicly share my disagreement (and here in Arabic) with these actions.

Those of you who are are friends on Facebook with FF have an opportunity to respond to FF’s bigotry. Whether you do it publicly by commenting on FF’s comment or privately in a message or in person is completely up to you. This is something you can and should do.

Here’s a screenshot with the comment before I hid it. I redacted identifying information. 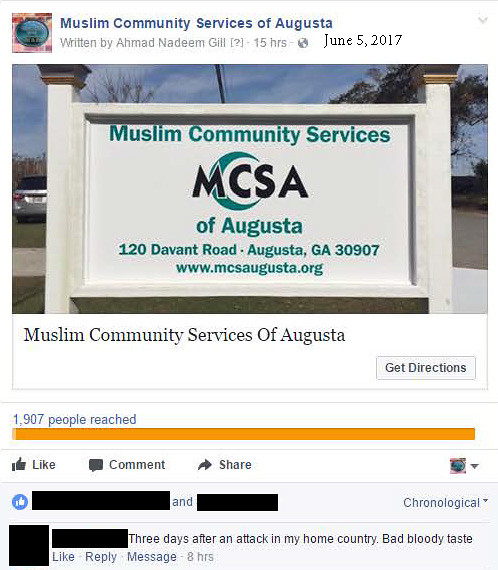