The Martin News reported (or reproduced a Robert Friedman press release) on July 19, 2017:

[Turner County] Sheriff Andy Hester has returned from Israel after an intensive two weeks of public safety and counterterrorism training with the country’s top policing executives. Hester was among a 20-member delegation of senior law enforcement officials from Georgia, North Carolina and Tennessee who participated in the Georgia International Law Enforcement Exchange’s (GILEE) 25th annual peer-to-peer training program in partnership with Israel.

I support the Boycott, Divestment and Sanctions Movement to pressure Israel into ending its human rights abuses of Palestinians. GILEE is one of the ways the United States funnels money to Israel and/or its supporters and exposes more and more US citizens to Israel’s view of the world.

(1) Counter-terrorism is a waste of money.
(2) Israel’s military and police are human-rights violators, and there’s no need for our nation, which is struggling to emerge from its settler-colonialist roots, to send its police to a settler-colonialist nation which embraces that ideology to exchange techniques on how to suppress people.
(3) Even if counter-terrorism training were necessary and Israelis’ training United States police officers didn’t make the latter more likely to abuse human rights, transactions with Israel should cease while it oppresses Palestinians.

I’m not going to go into details on these assertions, except for the waste of money part. Let’ s say a Sheriff makes $60,000 a year. My understanding from Human Resources-type people is that you can add another 15% to that in cost to Turner County. This would cover various taxes and insurance and pensions, etc. If the Sheriff takes two weeks training in another country, that means 2 weeks of 50 (assuming a conservative two weeks of paid vacation) are not spent in the County. So the County paid 2/50 x $60,000 x 1.15 = $2,760 for the training.

Of course, there is a fee that GILEE charges its participants. Let’s say that fee is $5,000. Am I making that number up? The minimum advertised price for a 1-week “Homeland Security” course advertised through the GILEE website is $3,900.  Turner County may or may not have paid this fee. It likely was paid through a federal counter-terrorism grant, perhaps channeled through a state agency.

Somebody paid for a round-trip flight to Tel Aviv. Let’s estimate that cost to be $1,000.

Of course, one of the tasks of the Sheriff is to supervise. Assuming this supervision is useful, let’s say it results in a 5% increase in the department’s productivity. Assuming the rest of the payroll of the department for those two weeks is $8000, then the county experienced $8,000 x 0.05 = $400 in lost productivity.

I request readers to correct my estimates.

Of course, these conservative estimates don’t take into effect the terrible costs some sectors of the public would suffer if the Sheriff actually tried to implement Israeli police practices such as ethnic/religious profiling, indefinite detention, torture and extrajudicial executions. Let’s just hope Sheriff Hester and his GILEE cohorts merely enjoyed the Mediterranean sun and the tourist sites and paid no attention to the instruction they received.

While counter-terrorism may seem like a more useful police goal than ticketing drivers on I-75, I believe the residents of Turner County would be better served if the police officers devoted themselves to preventing domestic violence, consumer fraud, illegal dumping and labor rights violations and, yes, promoting road safety. Were police to busy themselves with “counter-terrorism,” it would inevitably come at the expense of other public safety priorities.

Spending on counter-terrorism is vast and disproportional to terrorism’s minuscule threat. In fact, I’d prefer that local police watch Scooby Doo reruns to learn how to counter terrorism. Sometimes, when my checking account balance is low, I wonder if it’s too late for me to get in on the counter-terrorism boondoggle.

Finally, I’ve placed some screenshots in a Flickr album to try to give you an idea of how unlikely it is that “terrorists” would target Turner County, population 8,930. The closest landmarks are the Jefferson Davis Memorial Historic Site, a Georgia state park sited where the federal army arrested the rebels’ president, and the Big Peanut Monument. Turner County’s seat, the city of Ashburn, describes itself as [screenshot]:

A growing community that is safe, clean and healthy. A city that provides an environment for better lifestyles, education and financial stability, with equity and morality. [emphasis added]

It also uses E-Verify to avoid hiring undocumented workers. The websites of Ashburn and the Turner County Sheriff’s Department prominently display links to pay fines and post bond, respectively. Did Ashburn mean equanimity or equality? Or are equity and morality synonymous, bound-together concepts like peanut butter and jelly? 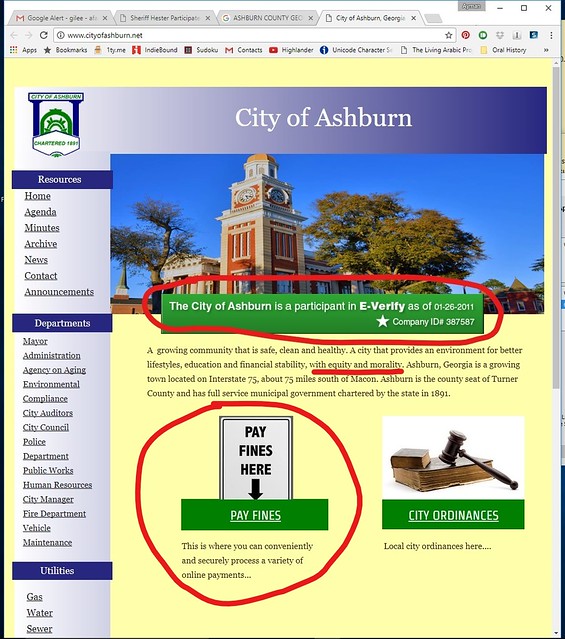