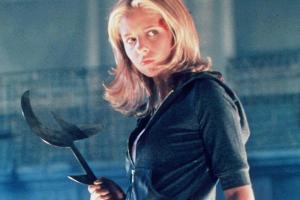 I recently subscribed to Hulu. Am I using it to watch original programming? No! I’m rewatching Buffy the Vampire Slayer!

Season 3, Episode 1, “Anne,” opens with Buffy working as a waitress in Los Angeles under the alias Anne. She had run away from Sunnydale, where she had been compelled to kill her lover Angel & send him into a hell dimension, kicked out of school by the tyrannical Principal Snyder and thrown from the house by her mother, who couldn’t deal with the news that her daughter was The Chosen One.

The anti-capitalist theme begins with the sexual harassment she endures working as a waitress from customers. Later in the episode, a customer who knew Buffy in Sunnydale asks for her help in finding a missing boyfriend. When Buffy finds his unnaturally-aged corpse, her investigations lead her to a mystically-concealed factory run by demons who exploit humans as slaves and then dumps their desiccated corpses in the streets of Los Angeles. When Buffy leads a revolt, the head demon says, “Humans don’t fight back. That’s how this works!”

Substitute “bosses” for “head demon” and “workers” for “humans”, and then you can understand class conflict.

When the slaves secure the factory, Buffy delivers the coup de grâce with aplomb!

This episode also gave me my favorite Sarah Michelle Gellar picture. She’s just put the kibosh on some demons, and then she rotates and raises her head, curved throwing knife in hand, looking for more ass to kick!

Season 3 of Buffy the Vampire Slayer also introduced Mr. Trick, played by Kenneth Todd Freeman. He was a “modern” vampire, and he sought to introduce industrial livestock techniques to replace hunting. Show creator Joss Whedon got to explore the themes of corporate, industrial evil in more depth in the spin-off series Angel.